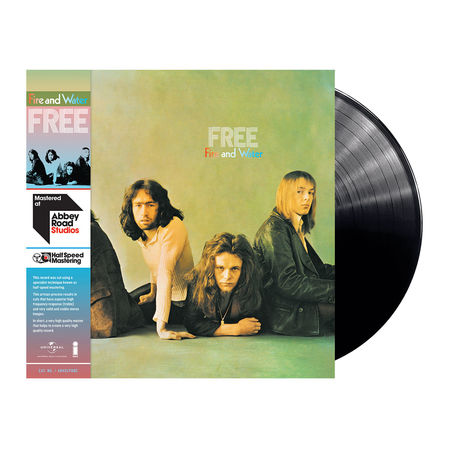 MusicVaultz and Sound Of Vinyl are thrilled to present a superior vinyl experience with Half Speed Mastering from Abbey Road. Six iconic albums have been exclusively re-mastered for vinyl at the world famous Abbey Road Studios to bring you a new level of depth and clarity. These records have never sounded so good!

Free's Fire and Water has been reissued on 180g vinyl, with replica first-pressing packaging and stunning half-speed remastering, undertaken at the legendary Abbey Road Studios in London.

Arguably the finest vinyl pressings that these albums have ever received, the half-speed remastering, cut from the original master tapes, has resulted in "superior high frequency response (treble) and very solid and stable stereo images", ensuring the best-quality sound available. Further care has been taken to create packaging that adheres to the same high standards, from giving each album its own individual obi strip, down to creating detailed artwork reproduction.

The limited edition launch range, all pressed on 180gm vinyl, come in deluxe packaging which includes a certificate of authenticity from Abbey Road. The initial releases are all iconic titles from great British artists - The Rolling Stones, The Police, Cream, John Martyn, Simple Minds and Free. All releases feature replica first pressing artwork, which means that Exile on Main Street includes all 12 original postcards.

The albums were cut from high-resolution digital transfers from the best known analogue tapes in existence by Abbey Road mastering engineer Miles Showell, one of the foremost practitioners of this artisan process in the world today. Only minimal sympathetic equalisation was applied to the transfers to keep everything as pure as possible. Also, as these are analogue, vinyl-only releases, Miles did not apply any digital limiting. This is added to almost all digital releases to make them appear to be loud and is responsible for the so-called “loudness war” and in almost every case is anything but natural and pure sounding.